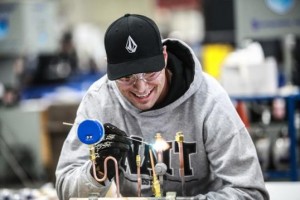 Grande Prairie was represented on the world stage when WorldSkills Team Canada descended on Germany in 2013.

In an Olympic-style competition pinning the best young trades workers against each other, 21-year-old Michael Scheideman had joined Team Canada and face off against 51 countries in Leipzig, Germany.

Grande Prairie’s own Scheideman showcased his skills in refrigeration and air conditioning.

At the provincial championships earlier in the year in Edmonton, Scheideman built a cooler. At nationals days later in the same city, he build a freezer. Each completed project is timed, and thoroughly scrutinized by judges.

“If you miss one step, you’re hooped,” he said. “Everything is down to a millimetre clearance.”

In Germany, the task was larger again, building an ice rink over a four-day period.

“I think it’s great what Skills does, of course with the trade shortages, putting more younger people into trades,” he said.

According to Skills Canada, 24% of Canadian employers stated in a survey they had not managed to find “the right talent to fill job,” based on Statistics Canada findings.

The nation’s construction sector will have to replace 152,000 skilled workers 2017, according to a 2007 report by the Construction Sector Council.

“It’s definitely something everyone should have chance to do,” Scheideman said.